This presents two problems for brands. First, almost everything we know about marketing (including digital marketing / media) comes out of the world of the audience. Marketing, to date, has essentially been audience-based marketing. But putting audience-based approaches into the social space just doesn’t work, because it can’t support the potential for creating high-value relationships with individuals. Traditional marketing is a high reach but low engagement business and there is no point in putting the low engagement techniques of traditional marketing into the low reach environment of social media.

Audiences are very hard to find or create in the world of social media. This is because when people are in this space they are looking to create connections and you can’t create connections with an audience, only with individuals or within groups. The social media space is a medium of connection, not a medium of distribution. When a brand operates within the social space it has to accept that it can realistically only talk to very few people at any one time so it therefore has to (and can) create relationships of far higher value than anything that is associated with traditional marketing. But you only do this by recognising what it is that people want from you in this space, which is real-time individualised response and recognition, answers to questions and information.

However, this fact is not stopping many brands from trying dump audience-based, low engagement approaches in the social digital space. Content marketing is the latest iteration of such an attempt. END_OF_DOCUMENT_TOKEN_TO_BE_REPLACED

How do we measure the value of content?  Given the amount of money many brands are currently sinking into content, this would seem to be a pretty important question to answer – especially since the conventional ways for measuring the value of content are not really designed to work in this new world where the brand positions itself as a publisher or media organisation – producing forms of online magazine.

To date we have generally measured brand content in two ways: either its effectiveness as a piece of advertising (usually via a direct link through to increases in sales) or we have measured it in the context of how it sits within a website (often through its place in a journey designed to lead through to online action or transaction).  In both of these instances the amount of content we produced was relatively restricted – either because it was expensive to produce or because producing too much of it lead to confusion.  However, the new approach dictates that brands produce a continuous, high volume stream of output – much like a conventional publisher.  No doubt this is why the publisher model is one that many brands like to reference.

Coca-Cola: leading the pack, but in the right direction?

Coca-Cola is one of the most high profile examples of a brand that has embraced the content and publication model.  In its, now famous Content 2020 video, chief creative type, Jonathan Mildenhall outlines how Coca-Cola is shifting from “creative excellence to content excellence”.  The corporate website has been declared dead and instead been transformed into a digital magazine and its stated ambition is to “make a Coke story part of your daily habit – whether it’s on Google+, Facebook, or Flipboard.”  Now that is some form of ambition.  I can’t even identify a traditional publisher whose content (at least in the online space) I consume as part of a daily habit.  The closest for me is the BBC – but even then I tend to come across their stories rather than making any conscious effort to visit their site (or use their app).

Set against this background, there has been a fascinating blogversation taking place between Ashley Brown – the prime mover at Coca-Cola behind the brand as publisher push, and Mark Higginson – from the University of Brighton.  Back in February END_OF_DOCUMENT_TOKEN_TO_BE_REPLACED 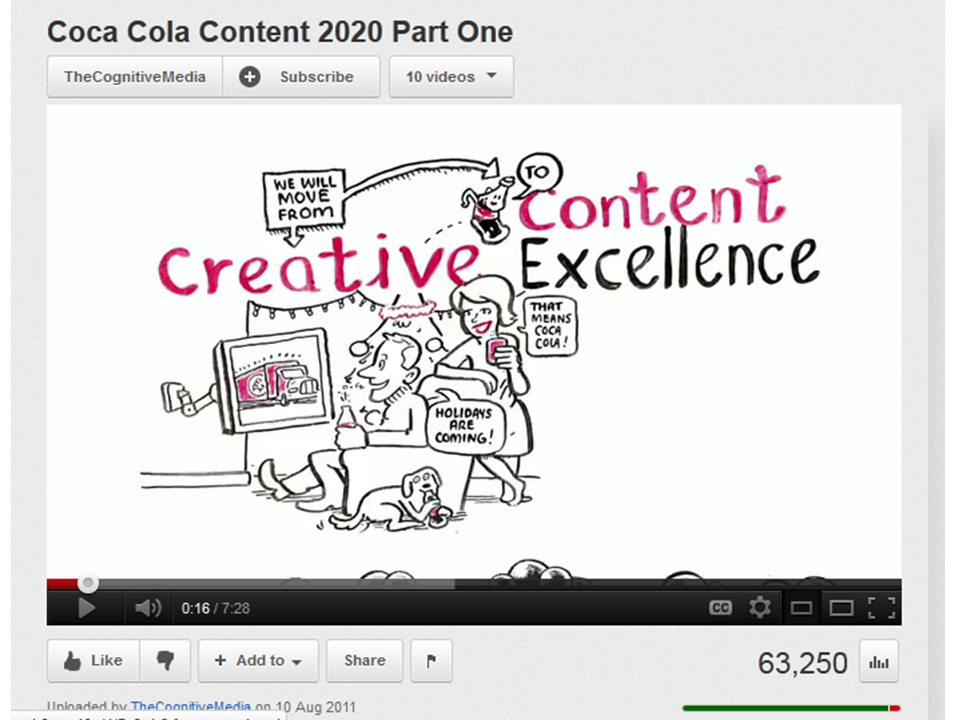 Content and Engagement – these are Big Things in social media at the moment.  But I have a theory that no-one, not even the really big, important, famous companies like Coca Cola and P&G has any clear idea what engagement and content actually look like in the world of social media.  I suspect we are all talking a big game, but basically bluffing.

So, I was taking a wander around Coke yesterday to gather evidence and I chanced into this video of its’ content plan.  OMG.  I pressed the play button and for the next 7 minutes and 28 seconds sat there spellbound, dazed and not a little confused.  This is either:

Or maybe a bit of both.

It talks about ‘liquid ideas’ (funny that for a drinks company) and a lot about stories.  Full marks for that – I am always going on about the importance of stories and the shift from reductive to narrative marketing.  But cop a load of this for how Coke defines ‘dynamic storytelling’ – it is “the development of incremental elements of a brand idea that get dispersed systematically across multiple channels of conversation for the purposes of creating a unified and coordinated brand experience.”  Now that is class marketing BS.  It also talks about the importance of data – no complaints there.  As I have previously said, the enormous amounts of data individuals are now generating is probably the single most significant aspect of social media, from a marketing or social control perspective.   Coke puts it thus: “Data will become the new (s)oil within which ideas will grow and Data Whisperers will become the new Messiahs“.  Data Whisperers, Messiahs, wow, OMG etc.

Anyway – I was entranced.  Also, you have to take your hat off to Coke and to Jonathan Mildenhall, Vice-President, Global Advertising Strategy and Creative Excellence, who provides the reassuring down-to-earth voice-over, for letting this dish out of the kitchen.

And then – I discovered there was a Part 2!  Ten minutes and 18 seconds more!  This time I made a coffee and got the biscuits out, but like many sequels, this was a bit of a let-down.  No more data whisperers, it all got a bit operational, with the traditional exhortations to be brave and take risk with the music rousing to a climax as we end on representation of the Coke bottle.

Still, the whole thing was a fantastic insight into what could be right and also what could be terribly wrong in major brands’ approach to social media.  I am not sure which is which at the moment, but I still stand by my belief that no-one really understands how engagement and content work in this new space and no matter how important content may be, a successful social media strategy has to be rooted in the creation of behaviours, not the creation of things.   And if you are going to create content, this has to be content that answers consumers’ questions.  It is not about providing a form of extended advertising albeit in a new channel (which is the sort of place we get to at the end of the second Coke video).

Anyway – I am going to have to look into this in more depth, and certainly use this as discussion material for future social media workshops.

Update: having tried this out in a few workshops, the central issue for me is Coke’s assertion that this is all about the shift from insight to provocation.  Totally wrong.  Provocation is not social.  The only reason Coke feels it needs to provoke conversations is because people don’t want to talk to it.  Or at least, the conversations they want to have with Coke are not the conversations Coke wants to be a part of.  Coke wants to have a “look at me, aren’t I fantastic – now go tell someone else how fantastic I am” conversation.  From a creative perspective, Coke (or any brand) has the challenge of putting itself centre stage – creating attention is what it is all about.  In social media, there is no stage, there isn’t really even an audience and in-so-far as there is, this audience wants to talk to itself, not to brands.  Hence the assumed need to provoke.