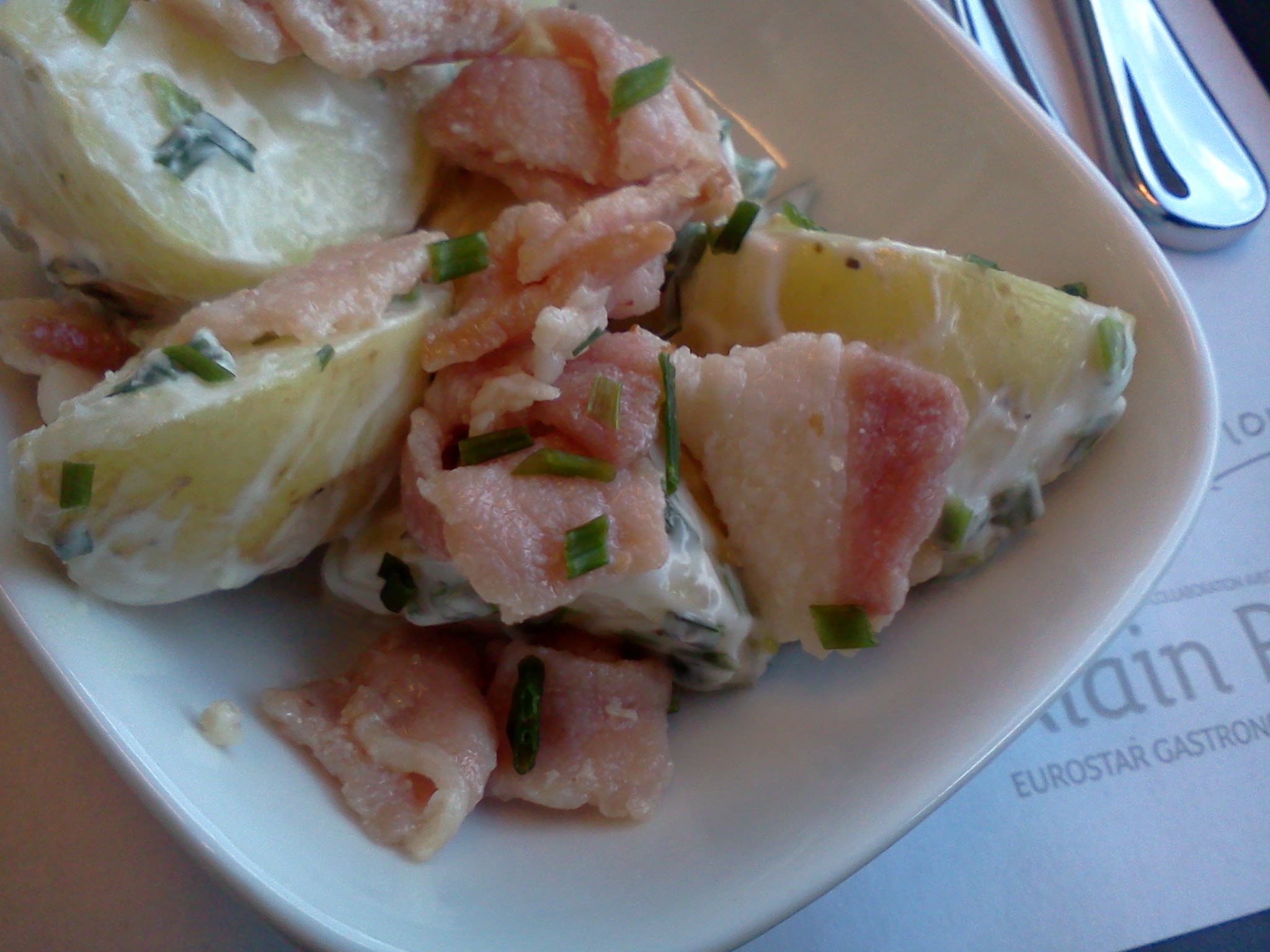 So – I took a picture of said bacon and put it in a tweet to @Eurostar.  Here it is.  I didn’t receive a reply.  This caused me to think about my relationship with the brand Eurostar – my ‘engagement’ with Eurostar to use a term that the social media revolution has now made a permanent fixture in the lexicon of marketing-speak.  Before the bacon incident, I had very little engagement with Eurostar.  I liked that fact that the Eurostar service, or more specifically the Channel Tunnel, had made it much easier to get to Brussels or Paris.  It was kind-of groovy in its early days, especially as the whole experience was so much more up-to-date than anything else being served-up on the British railway network at the time.  But, ten or so years in, Eurostar had become a purely functional thing in my life.  My engagement with it was low down on the scale – at least on the scale I use to measure engagement, which has at the top end things like relationships with friends and family.  I.e. Eurostar was down there with pretty much every other brand I, or anyone else, is likely to encounter.

And then came the bacon incident.  The bacon itself merely confirmed my view of Eurostar as being a brand which didn’t merit any particular consideration in my life.  And then, there was the lack of response to my tweet, which cranked them down a further notch or two.  Frankly, I didn’t expect a response.  But then I thought what if @Eurostar had replied.  Suppose they had said “Thanks for this, we will pass this onto our catering team”.  If that had happened, my view of Eurostar would have gone up quite considerably.  My ‘engagement with Eurostar’ to use the marketing speak would have significantly increased.  I wouldn’t have even cared if they hadn’t passed my comment on,  it was the simple fact that I knew they were listening that would have done the trick.  In fact, my ‘engagement with Eurostar’ would have risen to a point that was basically about as high as it could realistically expect to get, short of actually significantly improving the service (which is something marketing directors, unfortunately, are rarely empowered to do).

Creating the Expectation of Listening

And that is when I got my answer about mass consumer brands, social media and engagement.  There are actually lots of sorts of engagement you can seek to generate, but the only one that is likely to pass the test of both impact and the ability to scale is the engagement that comes from creating The Expectation of Listening.  Create this and you have something of more enduring value than almost all of the campaign driven activity that brands are seeking to build in social media.

(Note: I am probably being a little unfair on @Eurostar.  If you look at their Twitter stream, they do actually seem to be listening and responding, perhaps they thought my bacon tweet was just too pretentious.  However, the basic point still remains).

(Update: After this article was posted and, perhaps more to the point, a version thereof also appeared in the Huffington Post, I received a reply @RichardStacy Hello Richard, sorry we missed your tweet regarding your meal. We have passed this onto our catering team to investigate.)

A lot of brands are spending a lot of money at the moment stampeding into the social media space – setting up Facebook pages, building brand communities, creating YouTube channels, ‘getting into’ Twitter.  I am sceptical of this approach, largely because what brands are mostly doing when they get into social media simply replicates what they were doing in traditional media, ignoring the social bit.  I was expressing this scepticism when speaking at the DigitalAge conference in Istanbul last month, and in the lunch break I was reproached by a marketing director from a large Turkish brand who said “Facebook is great, it really works for use.  For example, I can use it so see what people think of our new ads”.  This floored me, since she was right.  This usage of Facebook is exactly how a brand should use it – to listen to their consumers.  But the idea of using it to listen to what people think of their advertising, rather than their product, seemed out of kilter.  And then I realised that what she, and probably most other marketing directors, are actually doing when they set up Facebook pages is using social media to measure engagement with their brand, not to generate it.

Using social media to generate, rather than measure, engagement

When marketing directors talk about engagement, the mean something that sits somewhere between noticing a product (seeing the ad) and actually buying it.  The act of purchase is seen as pretty much the peak of engagement albeit there still is some work to be done to encourage repeat purchase (create brand loyalty as marketing folk like to call it).  The problem is that we are using the wrong type of language here.  Words like engagement, loyalty, et al are completely out-of-place.  In the real world of real people these words are attached to concepts that have real meaning and importance: social relationships, genuine emotions, important stuff.   When was the last time you felt ‘passionate about’ or ‘engaged by’ a brand?  Our choice of soft drink (or toothpaste, or even mobile phone) is never going to be as important to us as our choice of friends.  No-one really cares about the difference between Coke and Pepsi, despite the huge amount of marketing effort designed to persuade us that we do.  At heart, marketing directors understand this, because they know they don’t need to generate genuine engagement, they need to generate just enough to make the marginal difference necessary to tilt us towards their product at the moment of purchase, when we are confronted by a range of products that are all, in essence, functionally identical.  And thus all this titanic marketing effort is worth it (and probably accounts for the desire to misappropriate big words like engagement and loyalty).

But for this type of low level engagement to work, it has to have scale.  It has to work across the whole target audience at the same time.  And here is where the problem with social media starts.  Social media is not very good at communicating with all of your audience all at once.  It is a conversation, not a speech.  Also, social media is social – i.e. it operates in the place where engagement is associated with real, important and significant things and where the traditional marketing definition of engagement ranks as insignificant.  Or to put it another way, when you are operating within social media that which might otherwise count as engagement in the traditional marketing world (Facebook ‘likes’, YouTube hits, comments on ads etc) is never going to happen at sufficient scale to create an effect and you are never going to be able to operate at the level of engagement (i.e. real social engagement) that will qualify as being sufficiently social, often because your brand is, and always will be, fundamentally low interest.

Brands are trying to counter this by creating activities or campaigns that will be seen as sufficiently interesting to become worthy of genuine ‘social’ engagement and are thus more interesting than the product itself.  The problem with this is that it can end up as a giant distraction exercise.  A good example of this is P&G’s 2010 Old Spice campaign.  This was cited as being a hugely effective usage of social media (37+ million hits on YouTube, 1.7 million Facebook likes etc).  It created scale, but if you actually analysed the conversation that was taking place, this was all about the ad, or the people imitating the ad, or the Old Spice Man.  There was no conversation about (or engagement with) the brand, and the only way the brand was seeking to represent itself in this conversation was by pretending to be the Old Spice Man.

This is not to say you can’t use social media to support conventional one-to-many mass marketing initiatives, but you are likely to find that traditional one-to-many mass marketing channels will still be the most effective tools to use to make this successful.  Social media will just be the add-on, often an add-on that enables you to measure engagement with the campaign.  And you will not be using social media in the way for which it is best adapted and which is likely, of itself, to generate a meaningful level of engagement

Which brings us back to the bacon.  If a brand can create the expectation that when a consumer wishes to speak to it, that consumer will be listened to – this represents the best and probably only way to use social media to generate commercially useful engagement.  This is because it is a) likely to qualify as sufficiently social and, b) be sufficiently sustainable to create a measurable effect over time.  Getting consumers to tell you what they think about the ad, or even the product, or about themselves (so you can more effectively target them) is a useful activity, but it is not a necessary activity and certainly not a sufficient activity to generate commercially useful engagement.

This may seem like a rather passive or mundane activity – especially compared with the glittering,  expensive and proactive activities that brands like to launch in pursuit of engagement.   However, it is not.  Listening effectively is difficult.  It requires a level of commitment and resource, especially to generate the scale effect – which will not happen overnight, but will happen in the medium term once people realise that they are dealing with a brand that listens, as distinct from one which simply speaks.

So, by all means, use Facebook to understand what people think about your new campaign, but recognise that the benefit that comes from this is only relevant to how you change the campaign.  You will only generate genuine engagement with your brand (rather than your campaign) when you start listening, and responding to, what people actually think about the brand.  And this is why, rather than spend money trying to recreate your website in Facebook, or ‘viral’ YouTube videos, or extensive social media campaigns, by far and away the most effective thing to do in social media is to listen to the space where people are talking about you and respond appropriately (bearing in mind that response may not simply be trying to join the conversation, but by actually changing the product or service).  It all comes back to managing the four key spaces of social media: