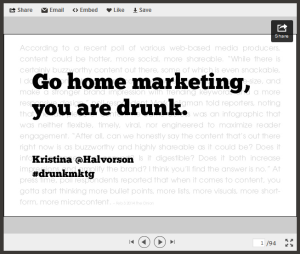 I don’t get to go to SXSW because I have to pay for my own airfare.  I can only go to the conferences that pay the airfare for me to come and speak.  Such is the life of an independent consultant.  However, I am fortunate enough to know some people who work for an organisation sufficiently large and enlightened to pay for some of its people to go to SXSW and since these people know what I am interested in – they can point me to the bits of it they think I might be interested in.  And they pointed me to a presentation by Kristina @Halvorson.

Please take the time to look at this (and / or listen to the accompanying words on SoundCloud) because it’s observations are spot-on.

It starts with an expose of the famous Oreo “dunk in the dark” Superbowl tweet which sent the marketing industry into such paroxysms of ecstasy.  The basis for her criticism was essentially the fact that while this tweet rocked the marketing world, it didn’t rock the world of the consumer for whom it was intended, basically because the actual numbers it reached were miniscule (in comparison say with the total numbers who tweeted about the event or watched it on television, or who might be considered Oreo’s target audience).  Music to my ears – so much so that I am going to use this example in a presentation at a conference in Hamburg in two days time.  (This is a conference which is paying for me to attend: In-Cosmetics 2014 if you are interested). END_OF_DOCUMENT_TOKEN_TO_BE_REPLACED