It has just been announced (in a Tweet of course) that Twitter CEO Dick Costolo has stepped down, under pressure from investors, because of a perceived failure to either grow the user base or revenue sufficiently.

Twitter has the same problem that Facebook has in that the ‘clever’ chaps on Wall Street who had to stick a number on it when it started to prospect for investment used the wrong model.  END_OF_DOCUMENT_TOKEN_TO_BE_REPLACED 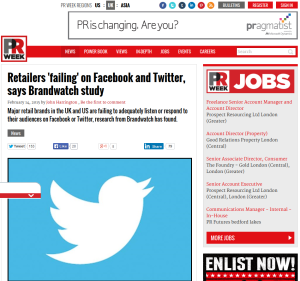 Here is a report on research from Brandwatch that I think neatly encapsulates where many brands have got to in terms of understanding and using social media.  OK, so it doesn’t actually say that swimmers are failing at mountain climbing, it says are that retailers are ‘failing’ on Facebook and Twitter because they are failing to listen and respond to their audiences.  But it may as well talk about swimmers and mountains because while it has identified the failure bit, it has reached the wrong conclusion about why the failure is occuring or what to do about it.

The failure is one of defining the challenge, it is not a failure of insufficient activity.  The challenge in the social media space is defined by behaviour identifiction and response (i.e. it is all about swimming).  The challenge in the traditional media / marketing space was all about channel and message, reach and frequency (i.e. mountain climbing).  So while Brandwatch correctly identified the problem i.e. failure to listen and respond it didn’t realise this was happening because it was positioned against the wrong challenge.  In effect the article is saying “you are failing to swim up this mountain, but if you flayed your arms about more frequently and thrashed your legs more vigourously you would be more successful .”  True enough, but you wouldn’t be that much more successful.  What the article should really say is “you are failing at swimming, but that is because you are trying to climb a mountain rather than cross a lake”.  Right activity, wrong context.  If swimming is what it is all about, look for a lake, don’t look for a mountain.

In reality, the reason most brands are not responding effectively is because this is not what they got into social media to do.  Listening and response is seen as the rather awkward consequence of being in the social media space.  It is seen as a cost that needs to be paid in order to fulfill the ambition of spreading their content far and wide and maximising  ‘engagement’ with their audience.  And like all costs, it should therefore be kept to a minimum.

Social media is entirely a behaviour identification and response challenge.  It is not a channel and message / reach and frequency challenge.  Listening and response is not a cost, it is the source of value creation.  Most brands haven’t really grasped this yet – but at least they are starting to realise that what they are doing has a problem (sort of).

Continuing the Facebook / business model theme, here is an interesting observation I saw on Social Media Today from Jim Worth.  He says that Facebook today reminds him of AOL in the 1990s.  AOL became the gateway people used to get onto the internet in much the same way as Facebook is the gateway people use to do social media.  But once through the gate, people often move on.  That, in a nutshell, is the problem Facebook faces.  Failure has stalked all of those who try and hold onto the people they take through the gateway – from AOL to Yahoo.  Why should Facebook be any different?