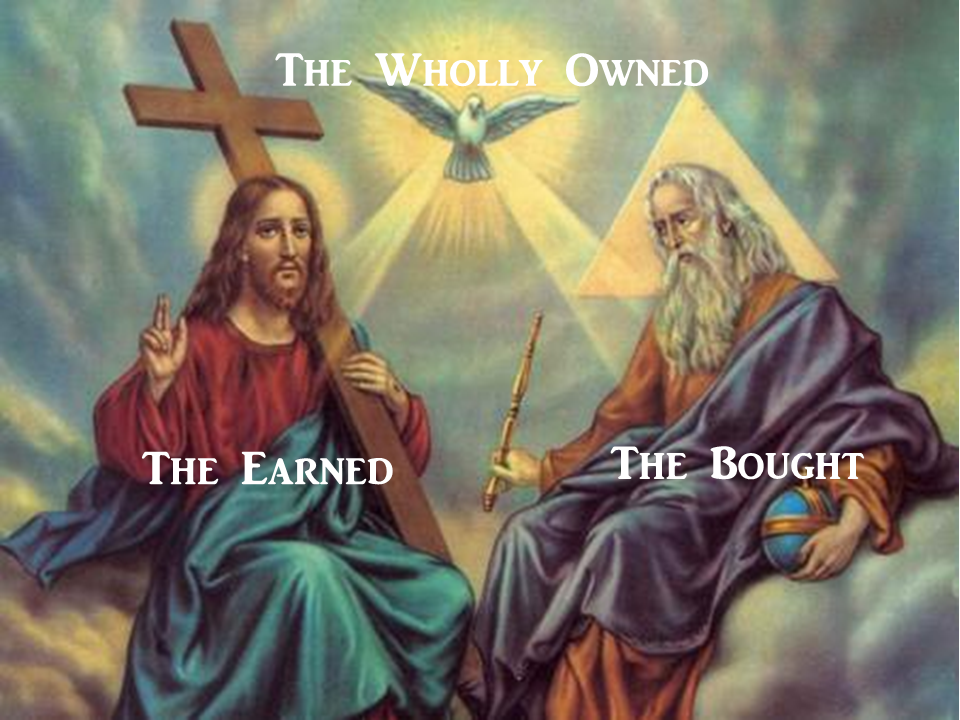 Christians believe that God comes in three flavours: God the Father, God the Son and God the Holy Spirit.  It seems to now be an established article of faith that Media is a bit like this: Media the Bought, Media the Earned and Media the Wholly Owned.   I think it is time we abandoned this doctrine.

The idea of bought, owned and earned is a definition constructed by someone who accustomed to thinking of media as simply a commodity – i.e. a traditional media planner, media buyer or media sales rep (the clergy of the old media religion if you like).  It may have once been a useful classification, although it has always struggled to extend its relevance into the ‘earned’ category.  As a former PR, I spent 20 years creating what a media planner would call earned media – but is there anyone actually in PR who uses this as a useful way of understanding what they do?  No.  However – as we move into a more social media world, I think this definition has completely outlived its usefulness.

Media is now needs to be seen as a spectrum that has participatory media at one end and non-participatory media at the other. The action is now mostly taking place at the participatory end – hence the challenge for most traditional media operations is how to make themselves more participatory.  Look at media this way – and it becomes a much more useful perspective to help understand  both what is going on and what traditional media needs to do about it (content as raw material not finished product, liberating media to find the content it works best with etc.)

Anyway – that’s my thought for Friday.