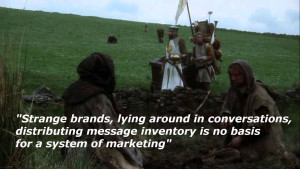 My thanks to the team at Digital Doughnut for drawing my attention to this relatively new report by eConsultancy and Quantcast. It is called ‘Programmatic Branding: driving upper-funnel engagement’.

I read the report and it gave me a vivid reminder of a feeling from my agency days where you find yourself in a conference room (probably in New York) listening to a presentation about ‘the new big thing’ (albeit presented in such a way as to suggest that this is not sufficiently new that you shouldn’t already know quite a lot about it) and find yourself struggling to resolve two competing reactions. The first is panic: OMG, the fact that I can barely understand what this guy (probably a guy) is talking about shows that I am just so out-of-touch I may as well resign right now. The second is: OMG I suspect this guy himself barely understands what he is talking about and is just making up a whole new set of words to either disguise his ignorance or take something which is actually very simple and make it sound incredibly complicated.   Experience has shown that the latter usually prevails. END_OF_DOCUMENT_TOKEN_TO_BE_REPLACED

The great thing about advertising is that no-one takes it personally.  This is not a criticism or prelude to a lament about how advertising is now redundant – it is not.  The very greatest advertising, like any performance or show, creates a sense of audience participation: the viewers experience a sense of collective engagement with the ad and (usually but not always) the brand that lies behind it.  Critically, they also receive assurance that the brand is popular and successful and that, as a consumer, they are not alone.  An audience is a necessary part of the performance that is advertising.  It is a bit like a rock concert.  If you are a Coldplay fan you want to see the band perform and be together with your fellow devotees watching Chris Martin in all his pomp whilst holding aloft your electronic gizmo thingy that apparently now come supplied as alternatives to cigarette lighters at all Coldplay gigs.  If you were the only person standing in the arena it wouldn’t be the same thing.  In fact you would probably be tempted to tell Chris to give it a rest and jump down off the stage and have a beer and a chat.

And herein lies the problem for advertising and social media, especially any social media platform whose revenue model is dependent on advertising.  The great promise that social media dangles in front of advertising is targeting, but the issue with targeting is that after a while, you narrow things down to the point where you stop having a group large enough to constitute an audience and end up with a group of individuals. The sense of participation is gone.  In effect you cross over a form of social digital divide beyond which people don’t want to be part of a crowd, they want to take things personally.  And by definition, advertising or any other form of one-to-many mass communication is not going to work on this side of the divide.  You are in a place where people want information (or conversation), not performance.

This doesn’t herald the end of advertising or other forms of one-to-many marketing campaigns.  People will still want brands to perform and find ways of reassuring consumers that they are not alone.  In fact, it is probably this latter function, the reassurance of statute and success, that will become the primary function of advertising and marketing campaigns in the future – a return to the days of the “as seen on TV” reassurance.  The only problem for ad agencies is that this is now not the only thing brands need to do, thus the only thing that is failing is the business model that currently lies behind the supply of advertising, not the form itself.  In many ways, social media could be the saviour of advertising.  It will liberate creatives to deliver what it is that advertising does best – a brand show freed from extraneous information baggage.  It is just that they can’t expect to earn quite so much money doing it.