There is a hidden danger in the term social media.  It is dangerous because its name implies it can deliver all the benefits of media, but now with the added engagement opportunities that come with being social.  Media gives us scale, social gives us engagement – put the two together and we can now do engagement at scale.  Fantastic!

There is a problem though.  Unlike conventional media, social media does not have scale built into it and we can often forget this relatively obvious fact. END_OF_DOCUMENT_TOKEN_TO_BE_REPLACED 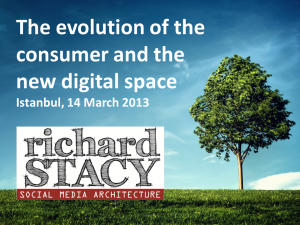 For those at the session at Bilgi University who want the presentation – here is a link to it https://dl.dropbox.com/u/90542197/Evolution%20of%20the%20consumer.pdf

For more information on what I do click here 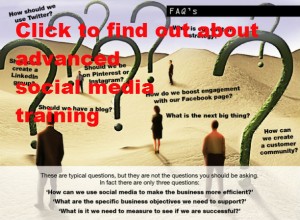 I have been in the social media game now since 2006, but it is really only now that I have been able to put a finger on what it is I actually do – which is advanced social media training (click here to check this out and here to download the Infographic).

Because I always wanted to be a sole practioner, rather than create an agency, I previously described myself as a social media consultant.  Consultant is a label which sounds professional and strategic and in many ways it wasn’t a bad label because what I ended up doing largely revolved around producing strategies.

I remember one such project, which was quite a large assignment, culminating in a 3 hour session with the executive team of the organisation.  Two things really stick in my mind from this.  The first was the comment from the CEO at the end of the session.  He said, “that was fantastic.  I really enjoyed the session, except the bit where you told me my business model was going to have to change.”  The other was a comment from the marketing director, during a follow-up implementation session where she said, “the trouble with a social media strategy is that I don’t know where it stops, because I don’t know how to implement”.

I drew two conclusions from this. First, the production of a social media strategy has to be turned into a process so that an organisation can work both strategy and implementation  out for itself, rather than having something delivered.  This conclusion was strengthened when I finally realised that social media is actually much better understood as a business process, rather than a set of communications outputs.  The second conclusion was that there was no point in trying to draw a picture of how the world was going to change as a result of social media and the empowerment of consumers or customers, because embracing this is too difficult for most organisations – they have to see the flames and smell the smoke of burning business models in order to create the necessary sense of urgency.  Also, most organisations, especially the large ones, are not going to turn their businesses upside down because some upstart tells them trouble is on the way.  If McKinsey tells them trouble is on the way, that is another matter.  But even then, McKinsey would probably have to say it many times and extract many millions in consulting fees before the point strikes home.

As a result, while I still work on strategic projects, usually in cooperation with marketing or digital agencies, I dropped the idea that I provide social media strategies and shifted instead to the idea that I help design and implement a process – i.e. training.  The only problem with this is that training comes in smaller chunks, especially as I have refined my core offer down into a one-day session and it therefore requires greater volume of projects.  This is why my New Years resolution was to become more focused on promoting my training offer.  Hence a distillation of what I do in an Infographic (download and distribute widely!) some tweaks to the website (I now use WordPress.org so I can avail myself of the fabulous Yoast to optimise my posts) and a campaign where I will have to practise what I preach and get out there in the digital space within which people are asking the question, for which my training is the answer.