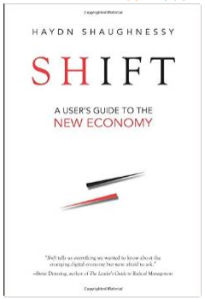 “A decade ago we were wondering what the Creative Economy might actually mean. Now we can see it: it takes the form of delegation of responsibility to individuals who have to find ways to cooperate and ways to innovate while taking risks with their time and income.”  So says Haydn Shaughnessy in a fascinating interview with Forbes’ Steve Denning.

It is an article that raises a host of hugely important issues, so many that it is difficult to know which to highlight or how to summarise them.  For a start it recognises that what is going here is not simply about new technolgies it is about a change to societies and social relationships – especially the relationship between institutions and individuals.

It also makes the critical point that, despite what we all like to think about the ’empowerement’ of individuals in this new creative economy, that is not what is really going on.  Businesses are essentially outsourcing risk and while this is efficient from the perspective of the individual businesses concerned, it is generates much greater costs and inefficiencies for the wider economy and society as a whole.  In a nutshell, if you can outsource innovation to a ‘creative community’ of  10,000 individuals, you can then just choose the one that works best and discard the 9,999 others.  Great for you, and the people behind the one you picked, but not so good for the 9,999.  Not only does this create a society of chronic insecurity, it is also hugely wasteful of effort.

Shaughnessy also makes the point that while this may work in the short-term, if business as a whole is to rely on this approach, it needs to create greater certainty of supply.  In his words “The start-up culture is self-congratulatory. They celebrate several hundred Fintech start-ups in London. But in reality, we need thousands or even tens of thousands of start-ups. To get to 300 successful firms, you need 10,000 start-ups. We are not addressing that kind of issue. What it means is that we also need to prepare people for a different journey through life.”

I was also pleased that Shaugnessy deals with the issue of scale and the extent to which scale no longer confers an advantage (something I have written about before).  He highlights the ability of many new companies to grow huge revenues and operate globally with very few employees often as a result of the fact that they are ‘born social’ and have a social purpose as a facilitator.  In the process organisations such as WordPress and TED they can create an intellectual asset base of goodwill that outstrips the ‘bought’ goodwill inherent in models of many supposedly successful ‘brands’ such as Coca Cola.

Anyway – read the interview (and the associated book).  It is one of the most important things I have read in a very long time because it doesn’t just paint a picture of what is going on, it explains why it is happening and what we need to do about it.