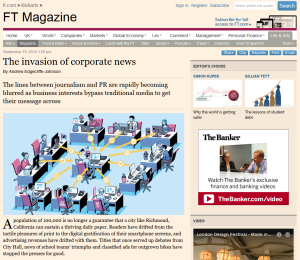 Last week, the Financial Times ran a piece written by Andrew Edgecliffe-Johnson on the rise of corporate news and brand journalism. In fact, there seems to have been a rash of interest in this subject of late – as highlighted here in GigaOm. As one would expect of the FT, it was a very comprehensive and considered piece, but it was a perfect illustration of an inability to produce a truly useful analysis. The article began thus:

A population of 100,000 is no longer a guarantee that a city like Richmond, California can sustain a thriving daily paper. Readers have drifted from the tactile pleasures of print to the digital gratification of their smartphone screens…

Tactile pleasures of print versus the digital gratification of smartphones. Has Andrew ever tried to experience the tactile pleasures of reading the FT on a crowded rush-hour tube train I wonder? It is certainly a different interpretation of tactile – one that is in danger of straying into the pugilistic. Far easier to access the same information on a small device you can hold in one hand. That’s not gratification, it is convenience.

But in starting his article this way, Andrew has already compromised its usefulness by tainting it with prejudice and support of vested interest. Change, in an off itself, is never either good or bad. There will be good bits and bad bits. Our ability to ensure that it becomes change for the better will depend on our ability to recognise this and distinguish between the two. However, it is difficult to do this when the debate becomes a competition between those with a vested interested in clinging onto the ways things used to be, versus those smelling a future opportunity.

Andrew’s article makes some good points, but it employs the familiar tricks of subtle distortion: taking extreme cases and nudging them into the norm, conflating issues that are best understood separately, establishing (tactile) angels and (gratificationary) demons, warning of either insidious creeping dangers, or else creating pivots of crisis. But he is a good journalist and these are just tricks of the trade. It is perhaps more informative to consider why he finds it necessary to deploy these tricks with such abundance.

I think there are some basic points about brand journalism, corporate news and native advertising / advertorial that need to be injected into the debate.

Brand journalism is nothing new

I was doing it 20 years ago. It has grown over the years as the resources of the traditional media have declined and also as the emergence of new, supposedly free, social digital channels have provided a car park for it. But the best brand journalism is really just a form of media relations. It has a symbiotic relationship with ‘traditional’ journalism in that it relies on the traditional channels to give it reach. It is not in competition with it, because if traditional journalism dies, brand journalism will lose its principal outlet. On the other hand the worst brand journalism simply ends up in those digital car parks (which are in effect digital dumping grounds). We are only just starting to realise, in the fevered rush to create branded content strategies, that most of the content itself ends up as ‘brandfill’ – stuff that almost no-one reads. But, of course, there is many a vested interest to be supported by the idea that the future of marketing lies in content (not least redundant traditional journalists seeking employment).

Corporate newsrooms are not going to replace traditional newsrooms, not least because as corporate organisations gain a better understanding of how to operate within the social digital space, they will realise that the role of a corporate newsroom is much more about providing real-time answers to questions, than it is about trying to manufacture news. Google spaces, rather than traditional editorial spaces, will become their focus.

Native advertising is also nothing new

(I was doing it 20 years ago). But native advertising is like alcohol, a glass or two every once in a while is fine, but sustained consumption becomes dependence and can lead to serious problems. The danger here is not the inability of the reader or viewer to distinguish between independent and paid-for editorial. In the short-term the success of native advertising is dependent on its ability to create confusion between the two (or else you wouldn’t do it). But in the longer-term the reader or viewer will always wise-up. And they do this by adjusting their frame of reference. I have done a lot of work with beauty and cosmetic companies. This is a space where there is huge involvement of consumers in sharing information, outside of the traditional media space. The reason for this is that the traditional media that serves the space has become so deeply compromised by commercial interest over the years, that consumers simply treat all of it as a form of advertising. And they have therefore created their own space for independent analysis: the space within which journalism (as a process or set of objectives) lives, quite independent of the things we call journalists. It is not that they have totally abandoned traditional magazines, it is just that they know implicitly that these are nothing more than the mouthpiece of the fashion and beauty industry. A vacuum was created, and consumers therefore filled it.

If you allow the native advertising trend to run its course all that will happen is that you will finally expose traditional media for what it is: which is a business like any other, rather than some sanctified guardian of truth which, rather inconveniently, has to find a way of paying the bills. Is that such a bad thing?

We should no longer conflate journalism with journalists

As mentioned above, journalism is a process or a set of objectives. Journalists are simply a representation of the institutionalised means by which we have achieved those objectives. They are a product of the way in which we distributed information in the Gutenberg era. But that era is coming to an end. The social media revolution is about the separation of information from distribution and thus the separation of journalism from journalists.

Such a separation should also provide some relief to those (such as David Holmes here) who become outraged at the very idea of there being a ‘brand journalist’. What he is really outraged about is the idea that brands can participate in journalism – but separate journalism from journalists and journalists simply become practitioners whose activities have no association with any higher moral purpose. The techniques of a journalist can be harnessed towards saving the world, or saving Coca-Cola, with no inherent contradiction or confusion of values.

This is where the problem, illustrated by Andrew’s approach, has its heart. Journalists hate this idea. Separate journalists from journalism and they all become just PRs – which is happening anyway. They are either PRs for corporations or PRs for media corporations.

We are not going to preserve whatever it is the process of journalism contributes to society simply by trying to preserve journalists and the business models within which they live, exhorting them to ‘up their game’ in order to counter a new competitive threat. The new journalism (sorry Mr Wolfe) is being done by people who in no way consider themselves to be, or are acting anything like, journalists. How we understand and support these people and processes is what we should be focusing on. This is especially important given the extent to which innovation in the new digital space is already being trampled on by a handful of cashed-up, post-IPO, predators desperate for a revenue fix. Or by investors, equally desperate to either drive fledgling businesses into the arms of such predators, or into their own IPO crash.

Basically, the whole brand journalism debate is a sideshow. Brand journalism has been going on for ever. It has been getting bigger and more sophisticated of late, but this does not make it some major new threat. In-so-far as it is being portrayed as such this is only for the purposes of creating a straw man to support a business model that is clutching at straws. It is time to start focusing on the important stuff – i.e. journalism that has liberated itself from journalists.