Antony Mayfield of Brilliant Noise recently drew my attention to this piece by Peter Abraham of Econsultancy.  Antony is one of the relatively few people in my Thinkers Twitter list because he is one of the relatively few thinkers in the social digital space that are any good.  However, in this instance I have to disagree with his thinking because Antony called this a great piece.

I actually think it is just another piece of blah blah from a marketing or digital agency that is struggling to maintain relevance in a space they either do not really understand or do not want to understand.  Harsh words indeed – but hear me out. END_OF_DOCUMENT_TOKEN_TO_BE_REPLACED 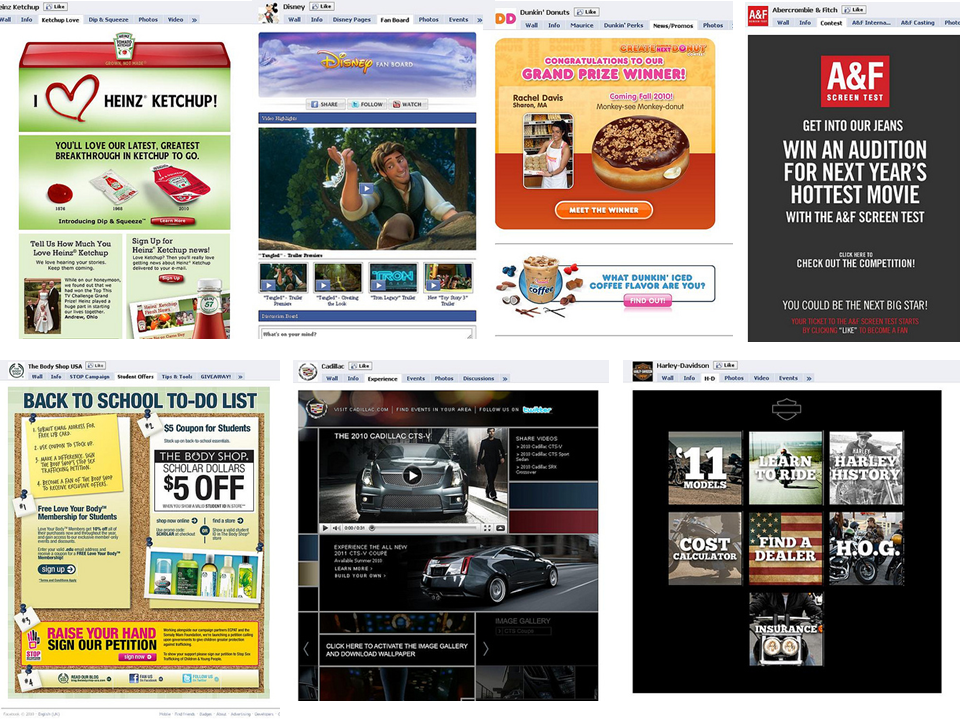 The other day I came across this post from eConsultancy while digging around for some examples of corporate use of Facebook.  The author, Jake Hird, had selected what he considers 25 brilliant examples.  What immediately struck me was that none of them looked like Facebook pages, they all looked like websites.  Indeed, this was the criteria the author was using: these were considered brilliant because they had ‘got round’ what was seen as the inherent design restrictions of the Facebook format by creating separate tabs as ‘landing pages’.

What sort of insanity is this?  Surely, the key to successful corporate usage of Facebook is to develop an approach that reflects how people actually use Facebook, based on an understanding of what it is that Facebook is adapted to do.  Facebook is not a website, it is a tool that small groups of people whom already have some form of social connection, use to preserve and enhance that connection.  That is a very different function from that of a website, which is designed as a destination that you drive the maximum number of people to in order to give them information.  The Facebook format is not something to be ‘got around’ it is something to be embraced.

Jake’s logic seems to be thus:  once upon a time we had a thing which we understood called websites.  Then something new came along called Facebook.  Facebook was really different and we needed to find a way to understand it so we decided the best way to do this was to try and turn it into the thing we understood.

I know this article was written some 18 months ago, time for both the author and the companies concerned to learn the error of their ways – but having checked the Facebook pages concerned, nothing much has changed.  Why?  Well I guess there are some powerful forces at work here.

First is fear of the unknown.  Marketing directors want to be reassured that all the knowledge and experience they have accumulated in the world of mass media, can easily be exported into this new world of social media.  It can’t, because social media operates to a different set of rules – as much as anything else, social media is not something you buy, it is something you participate within.

Second is the fear of digital agencies that their business model is melting.  Digital agencies, the smart ones anyway, know they are in trouble.  To quote the boss of one such agency “how are we going to make money building websites in a world where anyone can now make a website”?  However, if they can persuade marketing directors to spend lots of money creating customised Facebook pages or building expensive brand communities – that can be a lifeline.

Third is Facebook itself, which receives virtually all of its revenue from marketing directors and needs to keep them and their agencies happy and reassured.

There is a fourth, which is the fact that a Facebook page is a much better data capture opportunity than a website – hence the current obsession with securing Facebook Likes.  In fact most Facebook strategies go something along the lines of: drive people to the Facebook page, incentivise them to click the Like button, then get them the hell out of there into a digital platform better adapted to doing what it is We want to do with them.  But is this behaviour really sustainable and is it not fundamentally missing whatever genuine opportunities Facebook might present?  Facebook is, in many ways, just a new form of social behaviour.  That is certainly how its users relate to it.  And these users are only going to be prepared to ‘engage’ with those brands that understand and respect this.  (Long term this is also a bit of a problem for Facebook, because you can’t own a form of behaviour).

Personally, I think the sign of an effective corporate use of a Facebook page is that it looks like, well, a Facebook page – an environment that looks and feels exactly like the environment Facebook users are creating for themselves.  It should be a space where people who want to come and talk to a brand, can come and talk if they want to.  Frequently, of course, these people are going to want to ask questions or raise complaints – but that’s fine, it’s called customer service.  Of course, you don’t want people asking questions or raising complaints all over your website – yet another reason why turning your Facebook page into a website is a stupid thing to do.

The fact is that we are now operating in a bi-polar world – the world of traditional media and the world of social media.  The traditional media world isn’t going to go away in a hurry, it is just going to shrink in importance as the social media space grows.  The defining challenge for any marketing or communications director (in fact any CEO) over the next 10 years is how to operate with a foot in both camps and the key to this is the recognition that both spaces are fundamentally different: what works in traditional doesn’t work in social and visa versa.