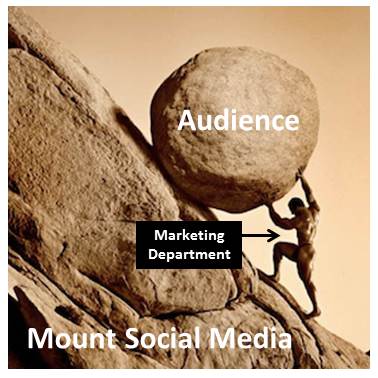 (Here is my column for publication in this month’s Digital Age).

Organisations only start to create measurable value from the usage of social media when the senior management of those organisations really understand what social media is all about.  Unfortunately, the journey towards this understanding is often a long and difficult one.

The first mistake senior management usually make is to assume that social media must fall somewhere within the remit of the marketing or communications department.  This is an easy mistake to make because this thing is called social ‘media’ and media is something that marketing people are paid to understand.  Marketing people themselves are usually keen to assume responsibility because it seems to present opportunities to create this thing called engagement with their customers which sounds good.  They will also find that the agencies they deal with are already knocking on their doors trying to sell them social media solutions and they are not knocking on the doors of any other departments.  Therefore having the marketing department take responsibility for social media seems such a logical decision that it barely generates any consideration at all.

However, there is a fatal flaw in setting off in this direction.

Marketing depends for its success on the identification or creation of an audience. This is because the channels that marketing lives within are all audience-based channels.  When looking at social media, most marketing people won’t be able to immediately identify an audience: there may be one billion people on Facebook but you can’t be on Facebook and automatically be in front of an audience of one billion people (as you could do when you were in conventional media channels where the subscribers to these channels can be seen as an available audience).  As a result, marketing people have an in-built tendency to frame the main challenge of social media as being the creation of an audience within it (so that audience-based approaches can continue to work).  Hence the objective will be to create a following on Facebook or Twitter, to try and maximise the amount of ‘engagement’ on these platforms and to produce a vast array of content in order to attract the maximum level of attention.

The problem with this approach is that audiences do not exist in the social media space and seeking to create them will be a fruitless exercise.  The social digital space consists of a lot of people having conversations and making connections, and these interactions are occurring in the most part between individuals or small groups.  Even massive social media properties such as a Facebook or even Wikipedia are built on the basis of micro-interactions.  Audience-sized groups do not easily exist within this space and trying to create an audience is like trying to push a boulder up a hill. You may have established 100,000 likes within Facebook, but this does not mean that you have created an audience of 100,000 – it just means that over a period of time you got 100,000 people to hit a button.  Only a tiny proportion of those 100,000 people will be paying any sort of attention at any one time to what you are doing on Facebook.  Social media is, after all, social and conversational and you cannot have a conversation with an audience.

This isn’t a difficult concept to understand, but it none-the-less presents a significant management challenge.  This is because no-one within an organisation has the incentive to understand this concept and embrace its consequences.  Marketing people don’t want to understand it because their competencies are based on creating performances for audiences of consumers and these talents have little relevance in understanding how to create valuable relationships with individuals.   Senior management don’t want to understand it because it means they do not have a box they can put social media within – they have to create a whole new department and function.   And at the same time, a huge level of distraction is being created by the cloud of operators within the social digital space as everyone talks about the latest new tools and what Facebook or Google is up to.  Just keeping on top of all this activity is a full-time job and the idea that all this frantic dialogue could simply be nothing more than a distraction from the main event seems barely credible.  If enough people are saying the same thing at enough conferences, then it all has to be both true and important.

It is also worth remembering that making a mistake only becomes a problem if you are the only one making that mistake.  If everyone is making the same mistake, these are just seen as market conditions.

The end result is that within most organisations, the enthusiasm with social media will eventually burn itself out, largely because of a failure to create any measurable value from it.  Social media presences will revert to the status of websites – things we all believe we must have just because everyone else has them, rather than because we have worked out how to use them to create competitive advantage.  Finding the way out of this slump is actually quite difficult, especially for large consumer marketing organisations, because the size and relative importance of their marketing departments acts as a black hole that drags into the void any ideas which run counter to audience, content and channel based orthodoxy.

The way out will usually start when people in departments other than marketing start to realise that social digital tools can be used to improve the quality and efficiency of relationships with people who are not lumped together as an audience.  It may be that these people are employees or they may be customers or consumers, but only very specific types of customer or consumer.

It is for this reason that the organisations which are already at the fore-front in the effective usage of social media tend not the ones with large marketing budgets.  They are organisations which already have more complicated and distributed sets of stakeholder relationships such as b2b businesses, third-sector organisations or even government bodies.   Critically, what these organisations are able to do is to demonstrate an effective return-on-investment for their initiatives and this will therefore attract the attention of the finance director and it is often through this route that the effective way of using social media is introduced to the CEO and the senior management team.

This is the point where social media becomes understood as a business process challenge, rather than a content output function and it represents the real starting point.  It doesn’t necessarily become an easier journey from here, because undertaking this journey successfully will probably involve an organisation making some fundamental changes to how it operates.  But competent organisations are usually good at doing this, once they know why they are doing it and can measure the benefits that result.

At the moment there are very few organisations that have reached this point.  Most are at the stage where they are about to enter the burn-out phase, where it becomes apparent that traditional forms of marketing are still necessary, but – depressingly – still present gradually diminishing returns and that social media has not been the great replacement or alternative we all thought it might.  But of course, this does not represent a failure of social media, as many will seek to characterise it, it represents a failure to understand how to use social media, which is something to which marketing departments will be reluctant to confess.