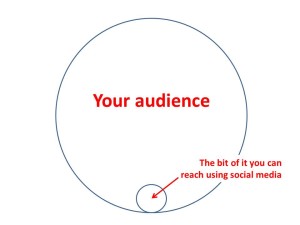 At the end of last year I was teaching a session on social media in a masters of communication course at the London campus of the European Communication School.  In total I was lecturing to 30 students in two groups.  Most of the students were French or Belgian and in their early twenties.  At the start of the course I conducted an exercise designed to define how  people actually use Facebook, based on the students’ own experiences.   What this exercise revealed was that everyone used Facebook to keep in contact with their friends and that this activity constituted the vast majority of the time spent on Facebook.  No real surprise there.

I then looked at engagement with brands.  Of the 30, only three confessed that they used Facebook to have any sort of contact with brands and of these three, two only did this in response to some form of incentive – getting freebies, entering competitions etc.  And only one person said that they used Facebook to follow brands in any proactive way – albeit time spent doing this was very small, compared to time spent keeping in contact with friends.

I also suspect I am being generous here.

The group I was talking to (early twenties graduates) comprised people who are probably the most engaged with social media generally.  If we were talking an audience more typical for most consumer products we would more likely find that one in 30 (i.e. three per cent) coming in at somewhere closer to one per cent.  This is, of course, just one sample – but I expect that the numbers I was generating hear are not wildly out of line with a more general case.  In fact, I am tempted to do a bit of work to try and bear this out.

There is, of course, nothing wrong with reaching less that three per cent of your audience – provided what you do with this three per cent generates significantly more value per contact, that the type of value we are accustomed to generating when we are seeking to reach 100 per cent of our audience.  In fact all effective social media strategies are defined by the fact that they are focused, at any one time, on individuals or very small groups and fractions of a total audience.

This is all obvious stuff – but it is not apparently obvious.  Most organisations are still approaching Facebook, and social media generally, with approaches that are designed for audiences, rather than individuals.  They still believe, for example, that the name of the game is content – forgetting that content is a concept that only works with an audience.   They still believe that it is a good idea to run competitions in Facebook, because this activity is proven to create the most Facebook engagement, forgetting that there is no point in running a competition that more than 97 per cent of your audience will never see.  But perhaps if brands are so keen to export traditional marketing approaches into social media, if we also export traditional media planning approaches into this space (i.e. advocating the design of campaigns that reach basically no-one) – this is a way of highlighting the errors of this thinking in a way which people can understand.

P.S. I first published this, in error as a page – which I will keep (but remove from navigation) in order to preserve its link, which several people RT’d